There are currently 4 Nation Guilds, one for each of the main Racial territories on Regisfall:

Each of these Nation Guilds require Resource Nodes to sustain their NPC Guards.

There are two main node types:

There are 3 main resource types that a node can be set to:

A combination of these resource types are needed to hire additional guards. The yield per node usually varies between 1-5, with higher yielding nodes being in more dangerous/isolated locations.

To contest a dynamic Resource Node, you must be in a Nation Guild and have at least 3 guild members(including yourself) within 20 tiles of the node to attempt contesting it.

There are 3 situations where a Resource Node will be contested:

This will instantly hand control of the node over to the contesting guild. 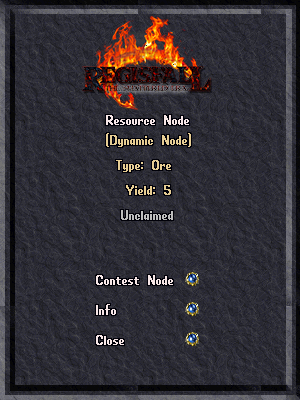 Note: If 3 or more members from the controlling guild are standing inside the node radius, it cannot be contested.

Upon contesting a controlled node, a world broadcast will read the following message: "Word travels quickly throughout the land, a resource node owned by [controlling guild] is being contested by [contesting guild]." 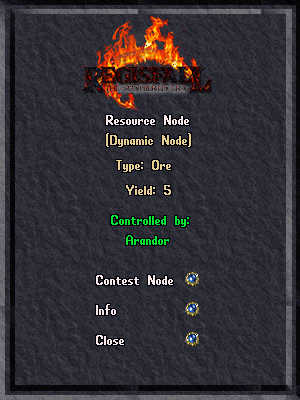 Nodes can only be contested between 2 guilds. Should a third party like to contest the same node, they must first wait until it is controlled. Once a node becomes contested, only the previous owner may attempt a new contest on it, this will instantly return control back to them(requires 3 guild members).

Note: If 3 or more members from the contesting guild are standing inside the node radius, it cannot be taken back by the previous owner. 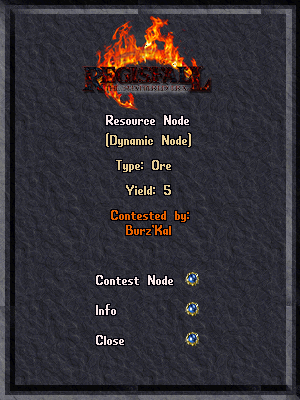